Most people first encounter Scoreholio as a system for weekly blind draws with a few dozen people, but you can use Scoreholio to run tournaments ranging from a dozen friends in your backyard to multi-day multi-stage tournaments featuring hundreds of participants.

The Misconception that Scoreholio Isn’t Good for Big Tournaments

Many people incorrectly think Scoreholio won’t work for big events because they learn the app supports up to 8 courts per “tournament” and brackets are limited to 32 participants. But most tournaments bigger than that break things up anyway. One approach is to run skill-based brackets or pools like advanced, competitive and social. Another approach is to run round robin pools and then seed upper and lower playoffs based on the results. This is the approach most really big tournaments (like 300+ team Spencer Makenzie’s Throwdown) use, and it’s a great fit for Scoreholio.

How to Run Small, Medium and XXL Tournaments with Scoreholio

I’ll set the stage for explaining how Scoreholio works so well for really big tournaments by walking you through how it works for tournaments of various sizes. The key to all of these examples is starting off with a round robin phase that guarantees participants a certain number of games, and then seeding playoffs based on the results instead of self selection or some other system. (More on that here.)

Let’s start with a fairly modest tournament: 30 teams. Most tournament directors aim for a ratio of about 4 teams per court, so let’s call that 8 courts. Yes you could run the whole thing as one bracket, or a couple skill-based brackets, but to establish the model I suggest for big events let’s look at the option of running teams through round robin and seeding them into playoff brackets from there.

To keep things simple let’s say you run all 30 teams as part of a single round robin, with each team playing 4 or maybe 6 games against random opponents, then split them up into two playoff brackets, gold and silver.  For each of those playoff brackets, you just use Scoreholio’s “Import” feature to pull through the appropriate players from the round robin. My example shows the top 16 advancing to gold playoffs and the rest to silver, but you can do that any way you want.

Running a Medium Tournament with Scoreholio

Running a Large Tournament with Scoreholio

Scaling up to a tournament of 120 teams uses the same logic and system, you’ll just need to start creating multiple brackets.

Let’s double things again to 240 teams. Hopefully by now you get how you can scale to any size using pools and brackets that break things up and give players a better experience. More guaranteed games, played more evenly over a longer period of time. 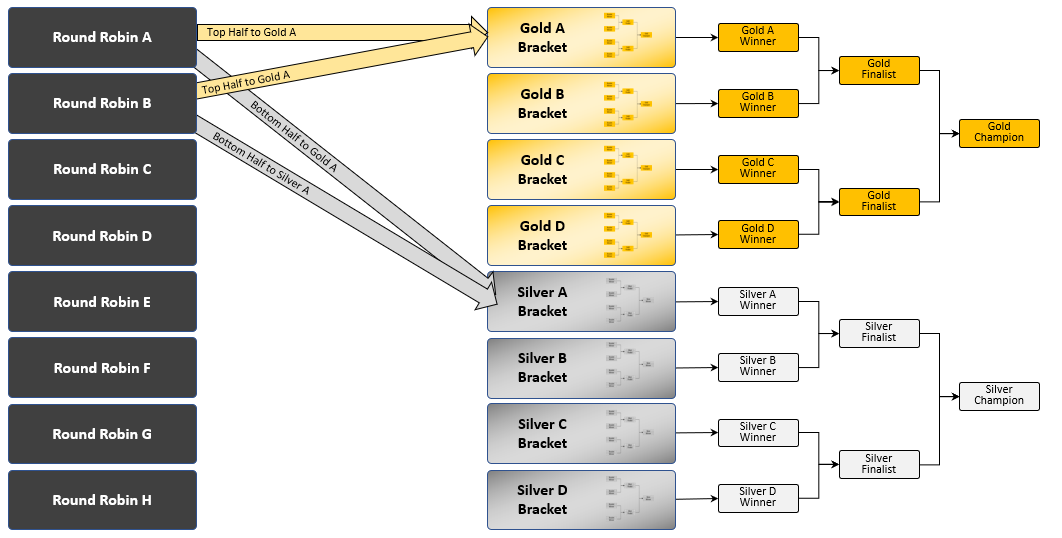 Getting Started with Scoreholio
Scroll to top