One of the most popular formats for social tournaments, whether one-time or as part of a weekly series of events, is the ‘blind draw’ where players are randomly paired up.

If you’re into this kind of thing, here’s the code by which Scoreholio generates random numbers.

You can have partnerships randomly generated from one large pool of all players, or assign players to skill-based pools (A/B, or A/B/C) to add parity to the mix. If you do this, the system will first pair all A players with C players. If there are more A’s than C’s, the system will start pairing remaining A’s with B’s. When all A’s have been paired up, the system will start pairing B’s with other B’s. In this situation, Scoreholio’s RNG code generates one random number from the higher pool, then a second random number from the lower pool, and pairs up those players.

You can also pair specific people together. You might want to do that if, for example, a couple or set of friends really wants to play as a team, and you decide they make a fair team. 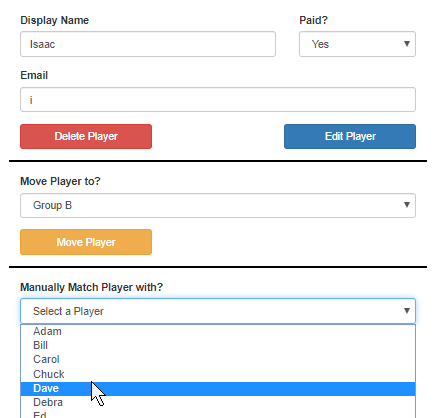 In this video, Ben shows you how to randomize players and get your blind tournament underway.

Want to join the discussion?
Feel free to contribute!