Note: If you’re sold on Switcholio, you can skip to the “how to” below.

A year and a half ago, I founded a cornhole club called Silicon Valley Cornhole. Like most cornhole clubs, our main activity has always been a weekly “blind draw” cornhole tournament in which participants are randomly assigned a partner for the evening. At first I ran my tournament as a double elimination bracket scribbled on a whiteboard, but when I discovered Scoreholio I started running my weekly as a round robin with a single elimination playoff.

The Problem with Blind Draws

No matter what format you run, if you assign partners totally at random you frequently end up with some stacked teams and some weak teams, which doesn’t make for a fun event. Before Scoreholio I addressed this problem by classifying my players as As and Bs with playing cards — A’s got hearts cards, B’s got clubs, then “find your match!” Scoreholio improves on that by letting you classify players as A’s, B’s and even C’s as part of the checkin process for blind draw events, then randomizing them.

Such A/B or A/B/C classification can add some much-needed parity to your event, but causes three new problems:

I wanted to make sure my best players continued to enjoy themselves, while making sure new players felt comfortable signing up to throw bags with us. In discussing this two-sided coin of a problem with fellow club runners, I had the idea of assigning people a new partner for every game of the round robin.

What is Switcholio, who loves it and why?

Simply put, Switcholio is a blind draw round robin in which players get a new partner for every game, and get ranked on an individual basis. The organizer can use that leaderboard to recognize and reward top finishers, or seed them into a single elimination playoff. 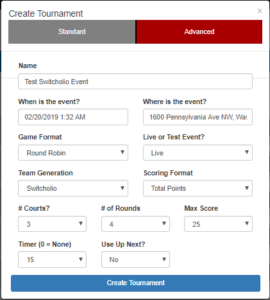 Switcholio sounds a little crazy, I get that, and that might make you nervous about running it the first time. But Scoreholio automates the whole thing, so there’s really not much to it. I’ll walk you through everything you need to know. To run Switcholio, create a new tournament with format set to Round Robin and Team Generation set to Switcholio. 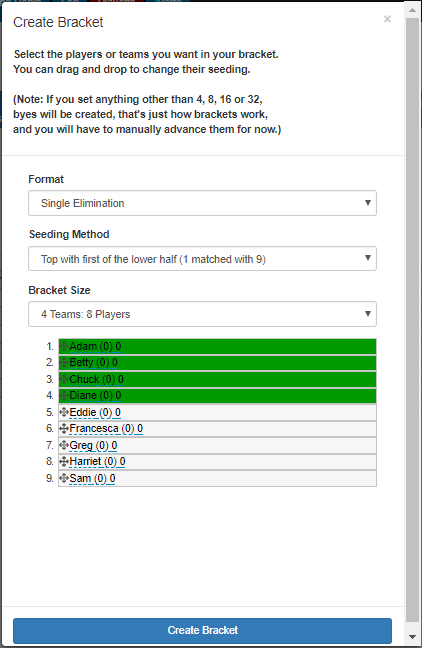 Running a Cornhole League with Scoreholio
Scroll to top